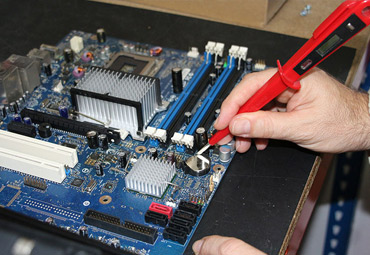 The goal of this chapter is to provide some basic information about electronic circuits. We make the assumption that you have no prior knowledge of electronics, electricity, or circuits, and start from the basics. This is an unconventional approach, so it may be interesting, or at least amusing, even if you do have some experience. So, the first question is “what is an electronic circuit?”

Computer Peripherals:-A computer peripheral is a device that is connected to a computer but is not part of the core computer architecture. The core elements of a computer are the central processing unit, power supply, motherboard and the computer case that contains those three components. Technically speaking, everything else is considered a peripheral device. However, this is a somewhat narrow view, since various other elements are required for a computer to actually function, such as a hard drive and random-access memory (or RAM).

Most people use the term peripheral more loosely to refer to a device external to the computer case. You connect the device to the computer to expand the functionality of the system. For example, consider a printer. Once the printer is connected to a computer, you can print out documents. Another way to look at peripheral devices is that they are dependent on the computer system. For example, most printers can’t do much on their own, and they only become functional when connected to a computer system.

There are many different peripheral devices, but they fall into three general categories:

Now select the appropriate data cable and connect one end of the cable to its drive socket and another end at its appropriate connector on the motherboard. For SATA hard disk drive or CD/DVD drives use SATA cable and its power cable, else use IDE data cable. Do the proper jumper settings as per the usage requirement.

It is time now to mount the memory modules on the motherboard by aligning the RAM to its socket on the motherboard and press it downward. Make sure the side tab are fixed into the RAM notch. If not, you may still have to press a bit.

Install the internal cards to its socket and attach the cables or power cable to it. The selection of right socket or slot is required as per the type of socket.

Cover the tower by placing it and pressing towards front side and screw it.

A system can be described in terms of its expected, desired or intended behavior (usually, for artificial systems, its purpose). Events or inputs to the system are expected to generate specific results or outputs. (For example, selecting the “print” option from various computer applications is intended to result in a hardcopy emerging from some specific device). Any unexpected or undesirable behavior is a symptom. Troubleshooting is the process of isolating the specific cause or causes of the symptom. Frequently the symptom is a failure of the product or process to produce any results. (Nothing was printed, for example). Corrective action can then be taken to prevent further failures of a similar kind.

The methods of forensic engineering are useful in tracing problems in products or processes, and a wide range of analytical techniques are available to determine the cause or causes of specific failures. Corrective action can then be taken to prevent further failure of a similar kind. Preventative action is possible using failure mode and effects (FMEA) and fault tree analysis (FTA) before full-scale production, and these methods can also be used for failure analysis.

User management is a core part to any directory service and is a basic security essential for any organization. User management enables admins to control user access and on-board and off-board users to and from IT resources